Since 2014 as volounteer, then since 2017 as Association, we are engaged in keeping open and usable the bell tower of the Cathedral.

It is a building of exceptional historic relevance, in addition to the remarkable architectural peculiarity. The tower is indeed double: inside the outer bell tower, datable between the XII and the XIII century, in Romanesque-Lombard style, is preserved the first and ancient bell tower. It is a tower almost cylindric, with a style clearly inspired by Ravenna’s bell towers, even if it does not have the same build quality. 40 meters high, is also the most ancient bell tower of the city, furthermore the presence of a “double” tower is a very rare condition in Emilia Romagna and almost unique in Italy (as far as we know, there are only other two tower bells built incorporating previous tower bells here in the region: San Mercuriale in Forlì and Santa Maria Vecchia in Faenza). 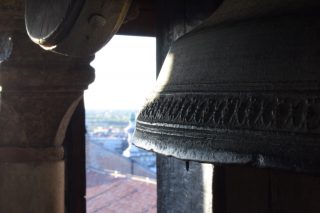 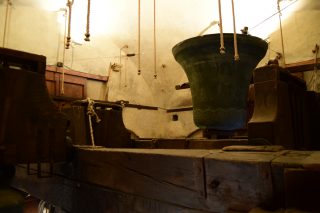 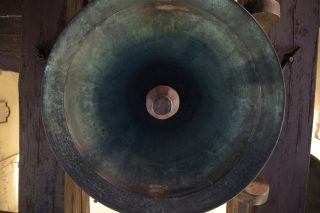 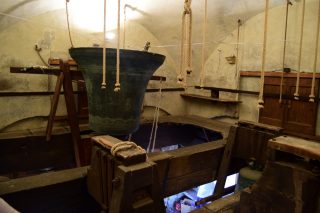 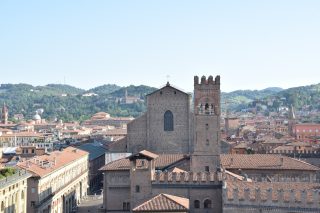 The outer tower reaches 70 metres in height, which makes it the second highest tower in Bologna, after the Asinelli tower. The visitors can walk the brickwork ramp in the gap between the two towers and can reach the top of the first tower (40 meters), then can access the first of three overlapping rooms, built on the top of the ancient bell tower. Then there is the bell cell, at 50-55 meters of height.

The landscape from the cell bell has no equal in Bologna: even if it is lower than Asinelli tower (which is over 90 meters of height), the central position of the bell tower, in the middle of the town center, make it possible admire the entire city and the nearby hills from a privileged perspective.

Inside the Romanesque bell tower, at 55 meters of height, is kept the most significant concert (set of bells) of the entire archdiocese, also the heaviest.

The concert consists of four bronze bells, melted in different centuries in the Cathedral’s sourroundings, and weighs almost seven tons.

The concert of the Cathedral is very important for the Bolognese bell art: even if Bologna is not the place of origin of the late sixteenth century technique, practiced to this day in the city and its surroundings, these bells, for their size and sound quality, constitute the highest point at which a bell ringer can aspire. Some data on the bells:

It is a bell sound technique typical of the city of Bologna and its surroundings. Probably born in St. Petronio in the end of the XVI century, it is today one of the oldest techniques in use in our country, as well as one of the less changed throughout the centuries. It plays, today as in the past, entirely by hand, without any mechanical or electronic help, contrary to the majority of other sound systems, which in Italy are more numerous than the regions.

The doppio (double) consists of making the bells make a complete rotation (360°), constantly alternating the direction of the rotation. It is a very spectacular, dangerous and hard technique, but that allows to obtain an otherwise incomparable sound quality, which is the reason why it is used still today. The Unione Campanari Bolognesi (Bolognese bell ringers union) takes care of keeping this practice alive and guaranteeing the liturgical service in the main churches of the diocese, at least in the main religious holidays. To them, for this commitment, our thanks.